Posted by Anthony Donskov on Wednesday, 21 November 2018 in Programming

There is currently a limited amount of information for the sport performance coach pertaining to stride mechanics and bio-motor mechanisms in competitive ice hockey.  The goal of this article is to briefly outline several research articles that may be used by professionals to steer decision making and/or gain a deeper understanding of the kinematic and bio-motor applications involved in the sport.  In other words, here is my brain dump!  A mixture of brief research findings sprinkled with some pragmatic takeaways.  Let’s start out by defining the hockey stride: 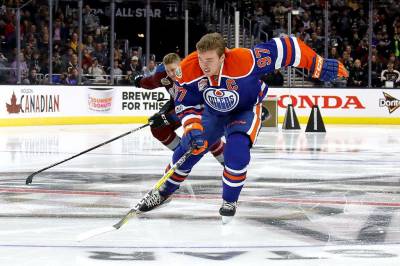 The skating stride is biphasic in nature and consists of a support and swing phase.  The support phase can be further divided into single and double leg support (18% and 82% of support phase respectively) (Marino, 1983). Propulsion takes place during both double and single support during the outward rotation of the thigh, coinciding with initial extension of the hip and knee.

Ankle mobility may play a role at increasing stride efficiency. Increased range of motion, in particular dorsiflexion, may aid the skater in assuming a lower skating position, thus reducing air resistance, while simultaneously increasing impulse, or the time the player has to produce force.  In addition, pre-stretching the achilleas may increase kinetic energy thus increasing propulsion.  Using electrogoniometers, researchers measured foot kinematics on the ice during a parallel start from defensive-zone face-off circle to offensive zone face-off circle.  The acceleration phase occurred during the first 5 steps with steps 6-10 representing steady state.  The following findings were recorded based on the average measurements of the sample size: (Pearsall et al., 2001)

The paradox of ankle mobility is the need for stiffness around the joint during play.  Hockey skates are engineered to provide structural support, and stability in a very different capacity than traditional running shoes.  Due to the near frictionless environment, players must produce a force perpendicular to the skate blade to propel themselves forward. Doing this with minimal support/stiffness may impair force production.  Robbing Peter (stability) to pay Paul (mobility) may pose to be a fruitless effort as many players have a personal preference regarding skate stiffness.  Although more research on kinematics of the ankle is warranted, we have made a conscious effort to focus on this anatomical area daily.  It starts when a potential player comes in for an evaluation and is a staple in our prehab work as a means of addressing limitations imposed from the repetitive posture of sport.  Ankle dorsiflexion is one of many kinematic variables dictating stride efficiency, as such, it should be measured and managed.

Bio-Motor Considerations at the Hip:

Researchers from the University of Calgary set out to identify muscle activation patterns during accelerative hockey skating.  In addition to collecting the EMG data, they compared and contrasted the movement strategies used by elite and recreational players.  Each group performed 15 repetitions of a 30-meter sprint while muscle activity was measured in the tibialis anterior (TA), medial gastrocnemius (MG), vastus medialis (VM), vastus lateralis (VL), and gluteus medius (GM) (Buckeridge, von Tscharner, & Nigg, 2016) 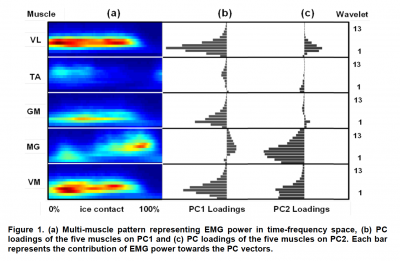 When referencing the diagram, Figure 1a represents muscle activity across all subjects during the contact phase of acceleration.   As we can interpret from this, the quads (VM, VL) and glute med (GM) are all integral and facilitated during on-ice acceleration.  However, when we look deeper at the diagram, we can start to notice subtle differences.  Figure 1b is the dominant muscle activation strategy used by elite players.  Here we notice much bigger contributions from the hip abductors (GM) and the two knee extensor muscles (VM, VL).  Contrasting this to Figure 1c, we notice that novice players relay much more on their medial gastrocnemius as a plantar flexor and that there is an inverse contribution from the vastus lateralis (VL) in additional to minimal facilitation of the glute med (GM).  In essence, elite players use a hip-knee extensor pattern to build speed, while novice/recreational players rely on ankle plantar flexor strategies, at the expense of the vastus lateralis (VL) and glute med (GM) during the late propulsive phase of acceleration. 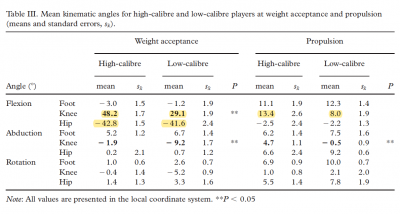 The adductor magnus is one of four adductor muscles responsible for hip extension and adduction. During the mechanics of the hockey stride, the adductor magnus is responsible for eccentrically decelerating the stride leg during propulsion (abduction, extension, external rotation). It has long been speculated that muscle strains, particularly in this anatomical region, are the byproducts of these repetitive eccentric forces (Tyler, Nicholas, Campbell, & McHugh, 2001).  Skating velocity has also been correlated with increased facilitation of the adductor magnus.  Using surface EMG on a skating treadmill, researchers found that as velocity increased from 3.3 m/s-6.66 m/s, the adductor magnus exhibited the greatest overall activation magnitude and activation time.  Kinematic data revealed that as skating speed increased, total range of motion at the hip, knee and ankle did not alter suggesting that even at low speeds the length of passive and active structures, including the adductor magnus, were at maximum (Chang, Turcotte, & Pearsall, 2009).

Adductor injury rates were most prevalent in NCAA men’s soccer and NCAA men’s ice hockey during a seven-year investigation into the prevalence of hip flexor and adductor strains for 25 respective NCAA sports.  Non-contact compromised the largest portion of these injuries (Eckard et al., 2017). Recurrence rates have been reported to be as high as 23.5% for the hockey playing population with an increase of cumulative incidence rate per year of 1.32 injuries/100 players. Of particular interest in the National Hockey League (NHL) is the incident density rate of these injuries is five times more prevalent during training camp as compared to the regular season (Emery, Meeuwisse, & Powell, 1999)