Posted by Anthony Donskov on Wednesday, 09 September 2020 in Coaching Development

My father was born in Belgrade, Yugoslavia and spent three and a half years living in a refugee camp before a church sponsored his family to come by boat to Northern Canada.  He was twelve at the time, could not speak a word of English, and his family had nothing except the clothes on their backs, and a few minor items they traveled with.  At an early age, my father learned valuable lessons that would help shape his life, and many years later, the lives of his sons.  Earning things meant sacrifice; priorities and obligations overshadowed privileges and hard work, discipline, determination and desire were expected, not asked for.  Survival meant scratching, clawing, working, learning and listening in order to learn a new language, adjust to a new culture, and make an honest living.  These experiences molded my father into the man he was: a survivor, a hard worker, and a highly educated professional never forgetting what it took to reach places that, at many times, may have seemed unreachable. I am certain that these experiences have shaped my father’s life in ways that I may never fully understand, but I know deep in my heart he has used these life events to raise his sons into the men they have become today.

In contrast, and due to my father’s work ethic, I was a more privileged child.  I had the best of the best: top of the line hockey skates, the newest model stick (always had two), gloves, pants and parents that sacrificed their time each and every weekend to drive me all over North America for the sport I loved.  I lived in a comfortable home, spoke the same language as my peers, went to a small public school and lived well.  My father worked hard to provide for us, but in return he expected our full effort.  It would be safe to say that my father and I bumped heads during my childhood.  He was hard on us!  He expected good grades.  He would often say “I don’t care if you get an A or a C, as long as you can look yourself in the mirror, and honestly say you worked hard to “earn it.” He placed little value on goals, assists, points, or penalty minutes; his critique was always about work ethic, pride, attitude and attention to detail!  His logic was simple: do your best and work hard! Looking back at my youth hockey experience, Dad’s expectations were fair and reasonable! Hard work, determination, desire, discipline, and pride can’t be drawn up on a dry erase board.  There are no drills that I’m aware of that facilitate these qualities.  They come from within.  They come from the gut!

Fast forward to the present.  My father’s lessons ring clear as a beacon in the night!  Our “head butting” was nothing more than my youth’s ignorance and my false sense of the world owing me something that I wasn’t willing to work for.  His discipline always came with purpose and with purpose comes love.  The older I get, the more I realize how he has shaped my ideologies as a coach, a man, a brother and a son.  Although I do not currently have children of my own, I do train a large demographic of athletes (professional, amateur, and youth) and help run our annual family hockey school (Donskov Hockey Development) that for the last twenty years has worked with over two hundred youth athletes each summer.  I am confident that one day I will recycle the lessons learned from my father to my own children.  The following “7 Habits of Highly Effective Hockey Players” is for parents, players and coaches.  These lessons have nothing to do with winning and losing, goals or assists.  These seven habits define work ethic, character and pulse.  These lessons are applicable to all sports and anything worth achieving.  They help shape the path of success in sports and life!  Thanks Dad for your influence, guidance, love and discipline!

The 3 D’s: Determination, Discipline, Desire.  The intangible tangibles!  These qualities define character and were instilled in me at an early age.  These tools also help in “setting the path.”  My father never set the path for me; however, he equipped me with the tools necessary to blaze my own path regardless of sports, academics or relationships.  Determination=How bad do you want it?  Discipline=Are you willing to sacrifice for it?  Desire=Do you love it?   The three D’s are user friendly!  Either you choose to embrace them, or risk peril ignoring them.  I loved the sport of hockey, and I knew in order to get better, I had to work harder, smarter and longer!  Natural talent alone is not enough!  If you rest on talent and choose to ignore the 3 D’s, reaching your inner potential will become difficult.  Love and fun (desire) are two very important ingredients in youth sports.  If one possesses determination, discipline and desire he won’t be found playing video games, behind the keys of a laptop, or watching the 64” LED.  He will be found playing multiple sports, skating on a frozen pond, playing in the driveway, or training in the gym. 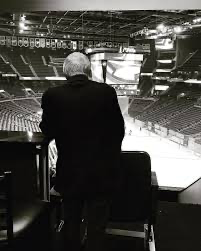 My father had his own “D” and that was discipline.  Looking back on my childhood, I can’t imagine living without it.  Discipline should not be equated with punishment, but a balanced mixture of love and of consequences for your actions.  If you don’t get good grades, you don’t play hockey.  Dad would say, “If you don’t work hard, don’t waste my time.  If you don’t practice, you will never reach your potential.  If you don’t sacrifice, don’t expect results.”  Below is an excellent story from one of my favorite Coaches, Lou Holtz, on the importance of discipline.

“The importance of discipline involves two young men, each of whom owned a new puppy.  The first young man showered his puppy with love and affection and allowed the dog to do whatever it wanted.  No restrictions, only unconditional love and freedom.  The other young man loved his puppy as well, but he also put a choke collar around the animal.  Anytime the dog behaved improperly, the young man would tug on the choke collar.  It didn’t take long for that dog to realize that there were limitations to his freedom.

A year later, the second man was able to take the choke collar off of his dog, and the dog roamed the neighborhood.  The owner didn’t worry, because he knew the dog would obey his commands, that he wouldn’t bite anyone or destroy property, and he wouldn’t abuse the freedoms the owner had given him.  The dog understood that actions had consequences.  The first young man could not give his dog the same freedoms.  If he let it loose, the first dog would have terrorized the neighborhood, destroyed property, and possibly harmed someone.  For those reasons, the dog had to be confined indoors.

The freedom the first young man thought he was giving his dog by not disciplining him turned out to be exactly the opposite.  The lack of discipline became a lack of freedom.  The dog that had been properly disciplined and shown the boundaries of acceptable behavior was allowed to run free, because the owner loved the dog enough to discipline it….My job as a Coach was to prepare the young men on our teams for a life of success and happiness.  That life had to start with discipline.”

Take home message: Discipline is not punishment; it is preparation for success!  How bad do you want it?  Are you willing to sacrifice for it?  Do you love it?   The 3 D’s have helped shape my life and it’s the philosophy we model at Donskov Strength and Conditioning.