Posted by Anthony Donskov on Wednesday, 12 October 2011 in Coaching Development

The current state of youth development is at a crossroads. What we’ve done for the past decade or so has been sub par. Kids have been encouraged to specialize at an early age (year round), play too many games, and parents dream on behalf of their children with the cumulative result to this equation leading to burnout and an underdevelopment of our youth.   Hockey is a glaring example. Here are some of the issues currently plaguing youth development (exert taken from Misha Donskov/ADM presentation):

3.) Training in early years focuses on outcomes (winning) rather than processes (optimal training).

4.) The "critical" or "sensitive“ periods of accelerated adaptation to training are not utilized.

5). The best coaches are encouraged to work at elite level.

8.) Lack of the integration of sport science, sport medicine and sport-specific technical-tactical activities

These are all major obstacles that need to be addressed in order to allow our youth development model to improve.   This is a process, not an overnight fix. As I have written in the past, coaches (volunteer or not) have a major responsibility in development. However, the first step, in my opinion, rests on the shoulders of parents! Look at the list above. The top four issues directly involve parents. Adult Values + Childhood Activities=Burnout! Every parent wants the best for their child, and I admire the dedication, but too many times this leads to more harm than good! Below are three areas that parents need to consider prior to cashing young Johnny’s meal ticket into the NCAA and professional ranks.

Don’t Dream on Behalf of your Child:

The perspective diminishes further when viewing the odds from Minor Hockey. The Ontario Minor Hockey Assoc released the following quote:

"Out of the 22,000 kids born in 1975 that walked into an Ontario Minor Hockey Association office and registered to play youth hockey, 17 made it to the National Hockey League. Mathematically, at the very best, you have a 0.0007727 chance of watching your kid play in the NHL." 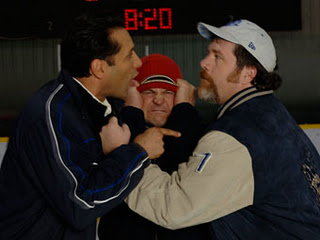 These stats are not intended to let dreams die on pillows, but they do offer clarity and crystal clear perspective. Let kids play, have FUN and develop. Let THEM dream! Quit worrying about young Johnny’s “full ride” scholarship. He’s 8 years old. He may not be playing hockey next year.

Skills are acquired through constant repetition. An organism cannot adapt if it’s not exposed to a stress/skill consistently. Full ice games/drills don’t allow young athletes to adapt and become competent at basic skills (skating, shooting, passing, stick handling). The answer to this problem is small area development in practice and small area games. Take a look at the data below.

The following stats were taken during a 60-minute peewee level hockey game:

The following stats relate to a 60-minute practice session: 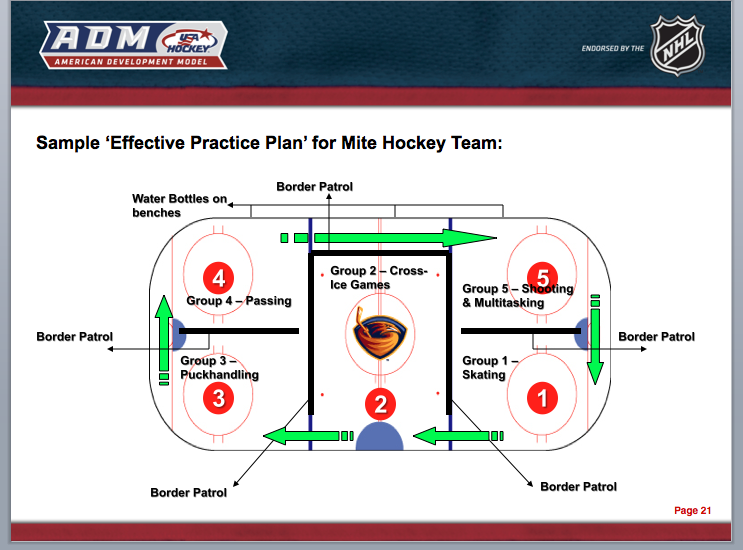 Allow kids to be kids. Have fun, play multiple sports. Develop fundamental sport skills. I love this exert from an old article in the Toronto Sun by Steve Simmons. In it, he interviewed Trevor Linden and asked him about his childhood. “I have asked many NHL players how they grew up in the game. My favorite answer came from Trevor Linden, who has captained more than one team. He said he played hockey until April and then put his skates away. He played baseball all summer until the last week of August. He went to hockey camp for one week then began his season midway through September with tryouts. No summer hockey. No special schools. No skating 12 months a year. "I didn't even see my skates for about five months a year. I think the kids today are playing way too much hockey and all you have to do is look at the development to see it really isn't producing any better players. "We have to let the kids be kids." When, I asked Gary Roberts recently, did he think he had a future in hockey? "When I got a call from an agent before the OHL draft," he said. "Before that, it was just a game we played." Do me a favor: Until the agent comes knocking on your teenager's door, let's keep it that way. A game for kids.”

Youth development should be viewed as a personal commitment to expose childen to a great sport while learning important life lessons and having FUN, not a payoff in the form of a scholarship or NHL contract. We all want our loved ones too succeed and grow. Allow this process to happen by letting THEM dream, think small (small area development) and play multiple sports. In the end they will thank you for it. I’ve never been great at math, but I certainly can tell you an equation that does not work: Adult Values + Childhood Activities=Burnout!