Posted by Anthony Donskov on Wednesday, 01 June 2011 in Coaching Development

Lou Holtz is more than a Football Coach; he’s a leader, a motivator, a competitor and a winner. I am currently in the process of reading his book tilted “Winning Every Day.” In it he shares a story on the importance of fundamentals. As strength coaches, this wisdom should not fall on deaf ears. Fundamentals are the bedrock of any sound strength and conditioning program. 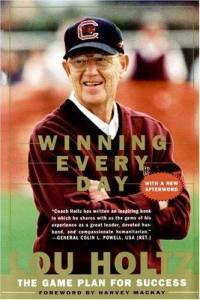 “Whenever I stress the importance of fundamentals, I like to tell the story about the guy who walked into the pet shop to buy a bird. He noticed several of them were listed at $1.90. When he went to buy one, the pet store owner said, “You don’t want those birds, sir. I have the ideal bird for you and it’s only $692.” The guy looked at the bird and said, “Why it’s just like all the other birds. How come it’s so expensive?” The store owner replied, “Ah, but this bird is different. It can talk and sing. The other birds just sit there.” The guy thought for a minute and said, “Gee, it’s a lot of money, but I live alone and would love to have the company.” So he bought the bird for $692. The next day the customer returned to the store, found the owner and complained. “I paid $692 for that bird and it doesn’t talk or sing.” The owner said, “Well, sir, what did the bird do after he rang it’s bell?” The customer asked, “What bell?” The owner said, “The bell the bird rings to tune himself. If he can’t tune himself, he can’t sing. I’ve got a bell here for only $23.” So the customer purchased the bell.

He returned irate the next day and complained, “My bird rang the bell, but he still doesn’t talk or sing.” The owner replied, “That’s impossible, I have the same type of bird as you. Why, just today he got up, rang the little bell, then ran up and down his ladder.” The guy stopped him and said, “What ladder?” The owner said, “You mean to tell me that you didn’t buy the ladder? That bird won’t talk or sing unless he first gets his exercise on the ladder. We have a ladder on sale today for only $27.” The guy bought the ladder. Over the next three days the storekeeper sold him a mirror, a swing, a birdbath and a pecking tree. At the end of the week, the customer returned in tears. He told the storekeeper, “My bird finally talked this morning. He woke up, rang the bell, ran up and down the ladder, pecked his tree, swung on his swing, and keeled over in his bath. Just before he died, he looked over to me and said, “Couldn’t you buy any bird seed?” FUNDAMENTALS. Ignore them at your peril.

Do you teach your athletes the fundamentals? Can they affectively squat, perform push-ups, pull-ups and hip hinge? If the answer to this is no, don’t waste your time on mirrors, swings, pecking trees, bells and baths. Birdseed is the answer! The best programs many times are the most boring! However, solid fundamentals are mandatory in building effective, efficient athletes.