You are here: Home » EasyBlog » Anthony Donskov » To Olympic Lift or Not to Olympic Lift: That is the Question!
Subscribe to blog Subscribe via RSS

Posted by Anthony Donskov on Thursday, 19 April 2012 in Programming

In a recent StrengthCoach.com forum the question was recently posed: “Are Olympic Lifts the Key to Collegiate Sports?” Although I don’t believe that one lift is the key to athletic success, it was interesting to read the responses. I have also learned in this profession to avoid acute angles. It seems that many disagree for the sake of being different and argue over the minutia.Hopefully this article avoids those angles! Still the question remains, are Olympic lifts worth the hype? I know several very well respected coaches who do not program these lifts. Hopefully this article explains differing points of view and allows the reader a better understanding of why we program Olympic lifts at Donskov Strength and Conditioning.

Anytime we consider exercise additions/implications in our programs at DSC we always try to answer the following questions (courtesy of Coach Dan John). Below are these questions and the corresponding responses with regards to Olympic lifting.

In addition to the above, I have personally found that Olympic lifts (in particular Hang Cleans) fit into a special category regarding load vs. velocity. Here is how we break it down at DSC.

1.) High load/Low Velocity: Typical strength based exercises: squat, bench press, and dead lift. I realize that the methods used for these exercises can be manipulated (ex. Speed squats, timed sets, contrast training), but due to safety concerns in our program design, we avoid them.

3.) High Load/High Velocity: Based on our programming, Hang Cleans fit into this category. Moving heavy load, fast, efficient and safely! Of all the “impact” implications of this lift, none is as important to me as the catch. The catch movement is key as this enables the athlete to eccentrically decelerate a heavy load. “As such, practitioners should aim to develop not only general strength and power qualities of the lower body through general strength training, but also weight-lifting, as this method of training allows for the relatively safe development of relevant eccentric-strength qualities through arresting heavy loads in the “catch” movement.” (2) 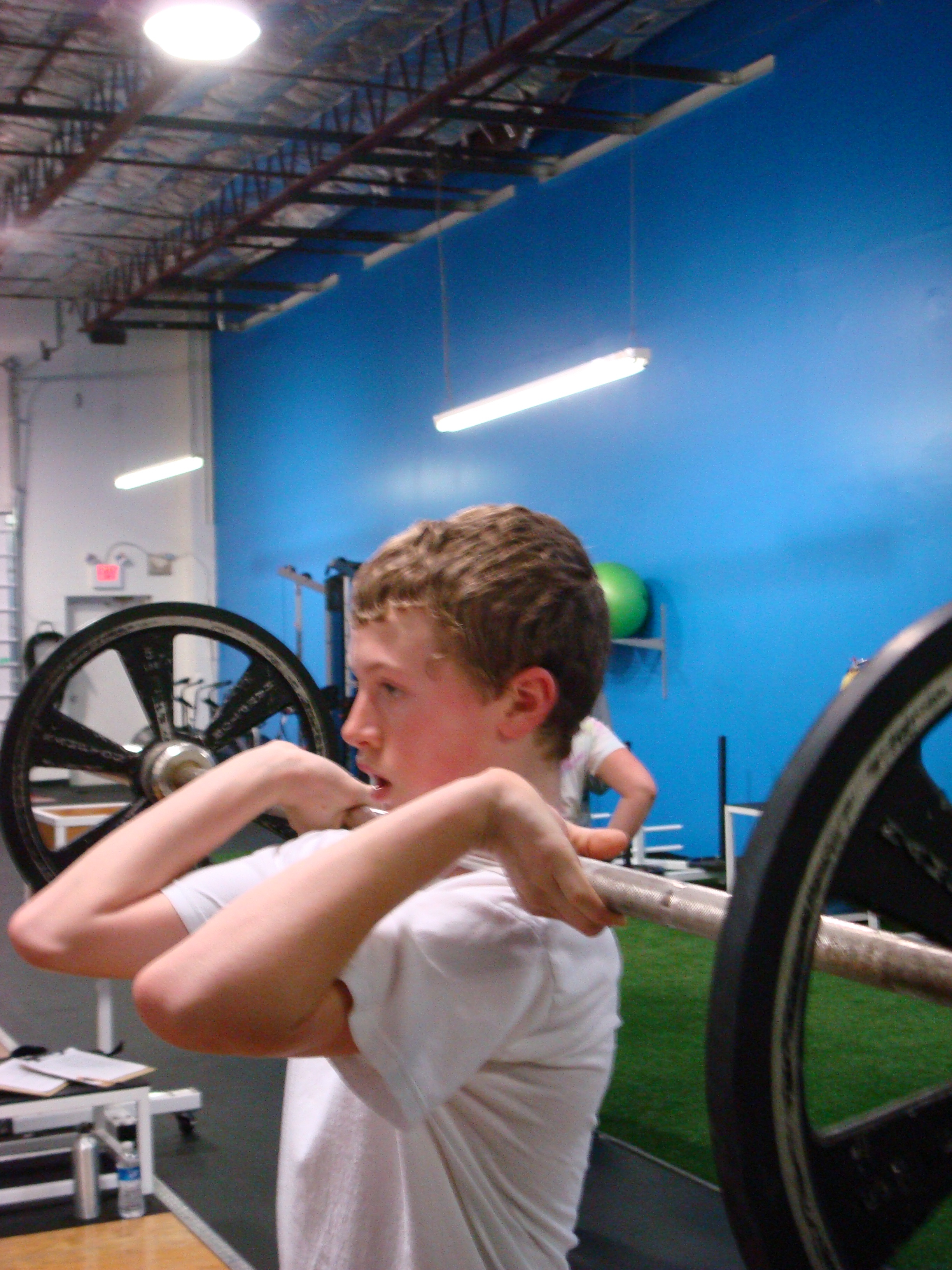 For the reasons mentioned above, we program Olympic lifts at DSC based on our population of collision, team sport athletes most of which (not all) would be considered novice/intermediate lifters. Note: we do not Olympic lift our adult clientele, our aging athletes that have acquired previous injury and keep away from certain Olympic lifts (snatch) while training the overhead athlete (i.e. baseball, tennis).

On the flip side of this equation, there are Coaches who do not choose to program Olympic lifts. Weather its lack of appropriate Coach/athlete ratio (overpopulated), short program duration, resources, equipment, competency in the lifts, or the feeling that a better return on investment exists.  Further, there are arguments stating the “transfer of training” in certain lifts is not as highly correlated as other modalities (Olympic lifts vs. jump training, shock training, ect).

Many of the Eastern Bloc practitioners have incorporated different forms of periodization. From the more traditional periodization approach (general preparatory, specialized preparatory, competition, transitional) to the more recent Block Periodization (accumulation, transmutation, realization) approach. The basis for this model is to slowly move to a more “specialized” task specific modality with a high transfer of training while simultaneously maintaining the residual affects (strength, aerobic capacity) of previous mesocycles. This method focuses on minimal qualities that encompass concentrated load, specificity, and systemic implementation that are trained consecutively not concurrently. It should be noted that this form of training is suggested for highly advanced, one-sport (typically), Olympic/professional level athletes with minute cumulative adaptation reserves, in other words the elite of the elite. According to Dr. Michael Yessis: “Doing the weightlifting exercise maybe effective for developing greater speed and explosiveness, but it will not necessarily transfer to the execution of specific sport skills except those in which the joint movements duplicate one another.” (1) According to this methodology, specialized exercise encompasses the below mentioned specifications.

1.)  The exercise must duplicate the neuromuscular pathway seen in the competitive skill.

2.)  Strength must be developed in the same range of motion as the competitive skill.

3.)  The exercise must involve the same muscular contraction as executed during competitive play.

According to Bondarchuck: “Positive interrelationships between exercises in each track and field event are determined with the use of correlational analyses…Also analyzed were tests results of individual athletes as recorded in different literature sources.”  (3) Although Olympic lifts are still used, other techno-tactical exercises that deem a higher “transfer of training” may replace them in this form of programming.

Many practitioners training elite athletes have used different modalities and methods to warrant adaptations that correlate to a higher so called “transfer of training” effect in the respective event. Again, it’s important to note that much of this application is based off of single sport athletes at the Olympic level with minimal adaptation reserves that train multiple times/day. Many Coaches have opted for these methods both for the fact that their athletes have reached plateaus in certain lifts and have a higher correlation to their event. Side note: It’s interesting to note the differences in Eastern European strength and conditioning protocol compared to US programming. In the US Strength Coaches’ focus on training physical qualities (strength, energy system work), Eastern European protocol not only focuses on physical qualities, BUT also techno-tactical skill training.

I don’t train Olympic level track and field athletes on a regular basis. The majority of college and professional level team sport athletes that I train would be considered novice/intermediate in terms of weight lifting experience with plenty left in the tank in terms of adaptation reserve. In addition, I believe team sports possess rigorous in-season schedules and are difficult to measure due to the high variability of performance. Olympic lifts are a staple in our programs at Donskov Strength and Conditioning for the aforementioned reasons. The benefits in application are important for our athletes to gain exposure too. I do understand that this may not be the case for every Strength Coach. There is no right answer for each and every situation! Weather its resources, duration or the feeling that there is a better bang for your buck that exists at the end of the day. Whatever you Coach, Coach it well. If every program were the same, our profession would be non-existent. In addition, there is no perfect program! To Olympic lift or not to Olympic that is the question.  We have formulated our own answer at Donskov Strength and Conditioning and we have enjoyed the results.

(3) Bondarchuck, A., Transfer of Training in Sport, Ultimate Athlete Concepts, 2007.