Posted by Anthony Donskov on Thursday, 18 June 2020 in Coaching Development

When it comes to programming for ice hockey we must ask ourselves…what qualities matter most in sport competition?  In other words, what qualities can we train off the ice, that make the most tangible differences on the ice?  What abilities make great players great?   In order to answer these questions, a good place to start is to look at some of the existing literature and attempt to see what correlates best with on-ice performance. 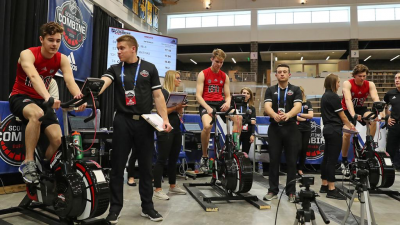 When looking at the sport of ice hockey the research is debatable as to which off-ice motor abilities correlate with on-ice success.  Certainly, sample size, group demographic (youth hockey vs college hockey vs pro), testing methods and time of year all play a role in the results.  No doubt testing and monitoring play a major role as well.  With questions unanswered, coaches are left wondering what qualities to focus on.  In this situation a 1/n approach may be the best way to prepare the players for the demands of the game.  1/n simply means diversifying the portfolio.  In economics this done to offset potential loss while maximizing gains.  The same basic principle applies in sport preparation.  In the coaching world, the 1/n heuristic means diversifying programming to include horizontal force development, vertical force development, strength and power training within the weekly microcylce.  This covers most abilities that have moderate to strong correlations to on-ice performance on a weekly basis as it pertains to current research.  Thus, minimizing losses while maximizing gains.