You are here: Home » EasyBlog » Anthony Donskov » Getting Your Hockey Legs Back
Subscribe to blog Subscribe via RSS

Getting Your Hockey Legs Back

Posted by Anthony Donskov on Monday, 18 May 2020 in Programming

Reflecting on my hockey career, I always remembered the first few days of training camp.  Those were intense times.  I also recollect questioning my off-ice preparation during these times?  Why did my legs feel so heavy?  Did I not train hard enough?  Time and time again, I didn’t feel I had my “hockey legs” underneath me.  For someone who took so much pride in off-season preparation, why did I feel this way?  It took me many years to formulate a working hypothesis.  They say experience comes at the user’s expense, if only I knew then.

Bottom line (my current hypothesis), if you want to condition the body for sport, you need to perform the sporting task in the environment on which it’s played.  There’s a reason Lance Armstrong finished 488th in the Boston Marathon.  It wasn’t his VO2max (central adaptation), rather the peripheral capacities of his muscular system.  This plays a critical role in sports performance.  Biking is a lot different than running, as is ice hockey [1].  It requires a totally different form of work from the periphery.  The physiology behind this concept is beautifully summed up in a 1984 paper from Holloszy et al [2].

“Central to this concept was the belief that the working muscles become hypoxic during exercise of relatively moderate intensity and that, as a result of improved O2 delivery (central adaptation), the same exercise results in less hypoxia after training.  The major evidence cited in support of this belief, which still persists in the “anaerobic threshold” concept, was that lactate concentration increases during submaximal exercise and that this increase is less after training.  This interpretation was based on the assumption that because lactate is the end product of what has been termed “anaerobic glycolysis,” lactate appearance must reflect O2 deficiency.  This is a misconception.  Lactate formation will occur when NADH and pyruvate are available to lactate dehydrogenase regardless of how much O2 is present.

O2 consumption at the same submaximal work rate is the same in the trained and untrained state.  If muscles were hypoxic during exercise requiring 50-70% of VO2max in the untrained state and if the lower lactate production and improved endurance at the same absolute work rates after training were due to improved O2 delivery, it would seem reasonable that aerobic metabolism, as reflected in VO2 should be higher at the same work rate after training.  Because this is not the case, it seemed probable that the lower lactate production and increased endurance in the trained state might in large part be due to metabolic consequences of biomechanical adaptations in the muscle rather than improved delivery of O2.”

Bottom line, the adaptation inside the muscle (peripheral) may be more important for metabolic clearance and respiratory capacity than the central adaptations of increase O2 delivery from the heart.  Yes, oxygen still needs to get there (central), but oxygen uptake allows one to use this oxygen for physical output from the muscular system. When discussing the intra-muscular adaptations a few factors are worth considering: 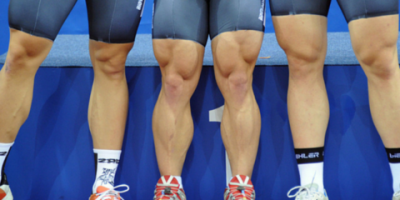 Mitochondrial Density:  Human skeletal muscle undergoes an adaptive increase in both the size and number of mitochondria (powerhouse of the cell responsible for producing ATP though respiration/regulate cellular metabolism), thus increasing mitochondrial density.  Mitochondrial volume density has been shown to correlate with increased oxidative enzyme activity, (with some enzymes increasing two to three-fold: citrate synthase, cytochrome c, CoA transferase), the ability to oxidize pyruvate, a decrease in lactate dehydrogenase, a slower utilization of carbohydrate as an energy source, and increase measurements of maximal oxygen uptake. The volume of mitochondria relative to the volume of myofibrillar density is considered a possible index of muscle respiratory capacity [3].  Increase in mitochondria without an increase in the number of myofibrils leads to an increase in respiratory capacity of the periphery.

The mechanism responsible for an increase in mitochondria is muscle contraction. The KEY point to all of this is that mitochondrial adaptations are LIMITED to the muscle fibers that are recruited to contract during exercise.  Specific contractions at specific joint angles lead to an increase in mitochondria content which requires a smaller percentage of the muscles maximum respiratory capacity and therefore results in less disturbance of homeostasis.  Evidence suggests that increased synthesis, rather than decreased degradation, is primarily responsible for mitochondrial proteins [2].

Want to get your skating legs underneath you?  Then get on the ice and skate!  Specific adaptations to imposed demands (SAID).  We all learned it in exercise science class, but somehow, I forgot it as a young athlete.  Skating, like playing the guitar, is a skill.  If you want to get more efficient at it, than do it, and to it often!  I wish I knew this early in my playing career, and so did my “hockey legs.”