Posted by Anthony Donskov on Tuesday, 05 May 2020 in Rehabilitation

The adductors are a series of long muscles that originate in the pubis (pelvis) and insert into the femur (leg).  In the sport of ice hockey, their function is to eccentrically decelerate hip extension during push off, while concentrically contracting during swing.  In other words, as the player pushes off, the adductors are lengthened.  As the player recovers his/her foot, the muscles are shortened.  Adductor strains are amongst the most common form of soft tissue injury experienced during competitive ice hockey.  Adductor strains are prevalent and accounted for 10% of all injuries (10 of 95) in elite Swedish ice hockey players [1], while others have reported that 43% of injuries (20-47) resulted from adductor strains in elite Finnish ice hockey [2].  In a study from Tyler et al. [3]   researchers found that National Hockey League players with adductor to abductor strength ratios of less than 80% were seventeen times more likely to experience an adductor strain.  In order to understand these implications, one must dive deeper into the biomechanics of the sport. 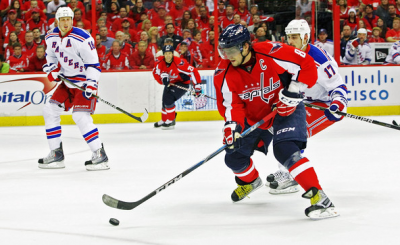 The hockey stride is accomplished by producing a force perpendicular to the path of travel.  Due to the frictionless ice surface, players must extend and abduct the hip concentrically while pushing against the ice in a perpendicular fashion (relative to the skate blade).  While the hip concentrically extends and abducts, the hip flexors and adductors are responsible for eccentrically decelerating and countering this force.  Often, as with most muscle strains, the injury occurs during vigorous eccentric (lengthening) contraction.  In addition, the insertion site of the adductors is relatively small and blood supply to the pubic bone in this region is relatively poor which further may predispose an athlete to injury.

During the off-season, it’s important to take these biomechanical considerations into account during programming.  Here are a few ways we will work this anatomical area into our protocol.

PRI Lazy Bear:  Quadruped Breathing seeks to reorient the pelvis and internally rotate the ribs thus restoring length tension between the anterior and posterior musculature of the hip.

KB Reverse Crunch:  Goal is to internally rotate the ribs while posteriorly tilting the pelvis providing inhibition to the hip flexors

Slide Board:  Unlike the hockey stride (open chain recovery), the slide board taxes the adductors eccentrically and concentrically during the recovery phase.  The goal is to strengthen this anatomical region with each push

Copenhagen Side Planks:  The athlete performs a side plank with his/her top leg straight and resting on a bench/box while the bottom leg is not providing structural assistance thus taxing the adductor complex concentrically

Programming does not have to be overly complex, but a basic understanding of the biomechanics of sport and the injury profiles experienced by players, is necessary for coaches to understand in order to deliver programs that aid in building robust and resilient players.