Posted by Anthony Donskov on Wednesday, 01 April 2020 in Coaching Development

The hockey stride has been described by bio-mechanists as biphasic in nature consisting of alternating periods of single leg and double leg support.  The single support phase corresponds to a period of glide, while the double support phase corresponds to the onset and preparation of propulsion (Marino, 1977).  Ankle mobility may play a role at increasing stride efficiency.  Increased range of motion, in particular dorsiflexion (think toes pointed up towards the sky), may aid the skater in assuming a lower skating position, thus reducing air resistance, while simultaneously increasing impulse, or the time the player has to produce force.  In addition, pre-stretching the achilleas may increase kinetic energy thus increasing propulsion.  Using electrogoniometers, researchers measured foot kinematics on the ice during a parallel start from defensive-zone face-off circle to offensive zone face-off circle.  The acceleration phase occurred during the first 5 steps with steps 6-10 representing steady state.  The following findings were recorded based on the average measurements of the sample size:  (Pearsall et al., 2001) 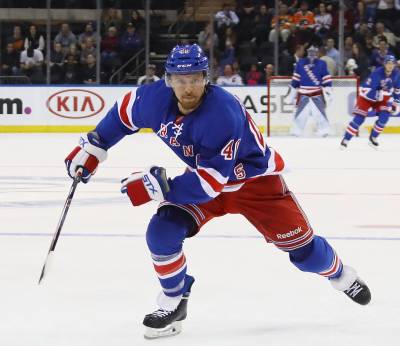 The paradox of ankle mobility is the need for stiffness around the joint during play.  Hockey skates are engineered to provide structural support, and stability in a very different capacity than traditional running shoes.  Due to the near frictionless environment, players must produce a force perpendicular to the skate blade to propel themselves forward.  Doing this with minimal support/stiffness may impair force production.  Robbing Peter (stability) to pay Paul (mobility) may pose to be a fruitless effort as many players have a personal preference regarding skate stiffness.   Although more research on kinematics of the ankle is warranted, we have made a conscious effort to focus on this anatomical area daily.  It starts when a potential player comes in for an evaluation and is a staple in our prehab work as a means of addressing limitations imposed from the repetitive posture of sport.  Ankle dorsiflexion is one of many kinematic variables dictating stride efficiency, as such, it should be measured and managed.