You are here: Home » EasyBlog » Anthony Donskov » Tools of the Trade: The Hockey Skate
Subscribe to blog Subscribe via RSS

Tools of the Trade: The Hockey Skate

Posted by Anthony Donskov on Wednesday, 01 April 2020 in Coaching Development

In my opinion, it’s extremely important to understand the tools of the trade for various sports and their requisite performance underpinnings.  In the world of hockey, perhaps no tool is as important as a player’s choice in both skates and sticks.  The hockey skate consists of a hard-outer shell, a rigid toe box to withstand the velocity of flying pucks/sticks, a padded tongue, which may, or may not be manipulated for increased range of motion, an Achilles guard, heel counter and skate blade. 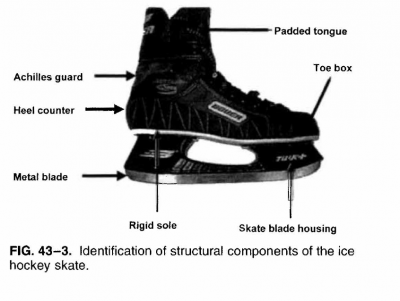 Players traditionally choose a skate that provides the most comfort while ensuring performance needs.  The balance of this so called “performance teeter-totter” typically resides in a personal choice between rigidity and range of motion.  For example, defensemen may choose a stiffer boot due to the fact that backward skating (C-Cut) does not have a swing phase only a stance (foot is on the ice the whole time).  In addition the trunk segmental angle (relative to the horizontal axis) in forward skating is significantly less than backward skating which indicates that players lean their bodies significantly forward during forward skating and not nearly as much in skating backwards [1].  More can be found here.  This choice has direct impact on biomechanics, and foot contact within the skate [2]. Lastly, in order to propel on the ice, a force must be created perpendicular to the skate blade which necessitates a level of stiffness much different than land based team sport activity. 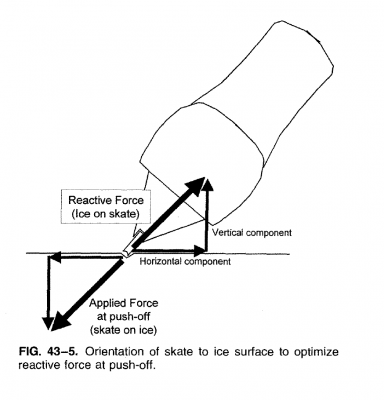 Regarding skates, three areas performance coaches should seek to understand are: radius of hollow (ROH), radius of contour (ROC) and pitch.  These changes/personal choices may alter balance, speed, stopping and change of direction on the ice [3].  The ROH is the groove in the width of the blade that defines both the inside and outside edge.  This groove can be deep or shallow depending on the desired performance effect.  Deeper hollows allow for quick change of direction, stops, starts and turns while shallower hollows permit more blade contact with the ice, hence greater potential speed gains.  Data analysis from Lockwood et al. have observed that the most frequent hollows used by elite defensemen and forwards are ½” and 5/8” accordingly [4].  In addition, ROH was negatively correlated to body weight indicating that lighter players preferred deeper hollows and heavier players preferred shallower hollows. 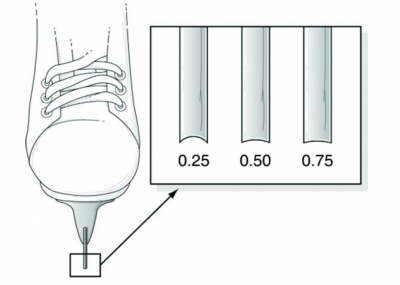 The radius of contour (ROC) is more commonly referred to as the rocker.  The ROC is the longitudinal profile of the blade and defines how much of the blade is in contact with the ice.  In theory, a shorter rocker (less blade on the ice) allows for greater agility while a longer ROC is more favorable for speed (speed skates vs hockey skates).

Finally, the pitch of the skate which is defined by the height of the blade and the position of the pivot point.  The pitch has the ability to change the lie of the skate which can alter position.  A forward pitch would place more bodyweight on the balls of the feet, increasing shin angles and possibly improving acceleration.  Different pitches may produce different skating techniques.  Using pressure sensors in the right foot, researchers observed that the anterior foot showed greater peak forces at higher speeds [5].  Perhaps manipulating the pitch may serve to augment these findings allowing players to increase speed on the ice.