You are here: Home » EasyBlog » Anthony Donskov » The Eyelet Controversy: A Biomechanical Perspective
Subscribe to blog Subscribe via RSS

The Eyelet Controversy: A Biomechanical Perspective

Posted by Anthony Donskov on Wednesday, 02 January 2019 in Coaching Development

Recently, there has been some fruitful dialogue by several close collogues regarding how best to lace up a pair of hockey skates for increased performance on the ice.  The idea of leaving the first eyelet untied in hopes of producing greater speeds was reinforced in a December article titled “The NHL’s best young skaters all have something in common-how they tie their skates” in The Athletic.  The purpose of this blog is to briefly outline the biomechanical considerations involved in this decision.  Prior to moving forward, we must first define a hockey stride. According to Marino (1977) a hockey stride is: 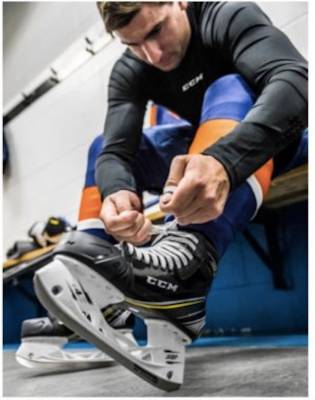 So Why the Missing Eyelet?

The goal with purposefully skipping the eyelet from a biomechanical prospective is to gain increased range of motion, in particular at the knee and ankle joints.  Basic biomechanics states that increase velocities result in increased joint amplitudes.  (Lafontaine, 2007).  In other words, in order to move fast, you better have the requisite mobility.  According to Marino, the best technique to achieve acceleration is:

By purposefully leaving the first eyelet untied we directly affect bullet number two. Getting lower in the hockey stride reduces the angle of the torso in relation to the ice, thus reducing air friction.  In addition, a lower knee bend directly affects stride length and propulsion time, both indicators of the amount of impulse being applied to the ice.  (McPherson, Wrigley, & Montelpare, 2004).  In addition, skaters create a propulsive angle between the skate blade and the ice surface in order to create the desired ground reaction force.  This angle is relatively large at the start of acceleration in order to build sufficient resistance.  The potential to increase this angle due to greater ankle eversion, may be yet another performance byproduct of leaving the first eyelet untied.

Unfortunately, research regarding biomechanics is relatively sparse in the sport of ice hockey.  Furthermore, most of the research involves acceleration and skating in a straight line.  However, the game of hockey involves not just acceleration, but deceleration, stopping, starting, and changing directions.  In order to accomplish this, a level of stiffness must exist to support the ankle, specifically for backwards skating.  In a journal article from Wu et al. the mechanical differences from forwards to backwards skating were outlined:  (Wu, Pearsall, Russell, & Imanaka, 2016)

Backward skating does not encompass a swing phase, coupled with a larger trunk segmental angle and less joint amplitude with propulsion.  In situations like this, stiffness is paramount.  I found it interesting that in the Athletic article outlining the fastest skaters in the NHL, of the 12 athletes mentioned, only two were defensemen.  Extra mobility, comes at the expense of stability.  Something to consider prior to making your eyelet decision.

In terms of muscles and human movement, two of the most important architectural parameters are physiological cross-sectional area (PCSA) and fiber length.  Muscle force is proportional to PCSA and muscle velocity is proportional to fiber length.  Longer muscles generate higher velocity movement which may be critical for speed on the ice regardless of eyelet preference.

Work is equal to force applied over a distance.  Thus, if we increase the length of a lever, we can reduce the force needed to get work done.  This is the equivalent of riding a bike with a WD40 chain as opposed to riding a bike with a rusty bike chain.  Efficiency is maximized with the former, rather than the latter.  Another interesting quote from the article came from Dr. Lockwood: “I want to make sure there’s no confusion,” Dr. Lockwood said emphatically in regards to McDavid, who she’s worked with in the past. Conner’s skating is mechanically untouchable. He’s extremely well balanced and a long-levered kid who, based on his mechanics, would be a great skater in skates with no laces.”  Eight of the twelve skaters mentioned in the article were over 6’ tall with potentially longer lever systems allowing for increased efficiency on the ice.

Skating is a skill.  As is the case with most questions these days, the answer to skate set up does not reside in a black or white response.  My answer as to whether one should skate with their first eyelet untied is….it depends.  As a former player myself, I would be less inclined to make this suggestion to a veteran as his nervous system has accommodated and acquired a unique stride signature throughout years of competitive play.  In addition, one may argue that the skate is the most important tool for the player to have autonomy over.  My response may change when dealing with an intermediate player possessing poor biomechanical traits such as railroading, shallow knee bend and incomplete recovery, or a player who is coming back from injury and has lost a first step.  Of course, yet another consideration is position on the ice as both defensemen and goaltenders may need the extra support in the form of stiffness.

Biomechanics plays an important role in each and every sport.  It’s important we as performance coaches look at the relevant literature coupled with our own unique pragmatic experience prior to making a rationale decision regarding how to best apply the tools of the trade.