You are here: Home » EasyBlog » Anthony Donskov » The Pareto Principle: Strength and Conditioning Implications
Subscribe to blog Subscribe via RSS

Posted by Anthony Donskov on Tuesday, 11 December 2018 in Health & Wellness

Vilfredo Pareto (1848-1923), an Italian polymath/economist was credited with the “Principle of Unequal Distribution.”  Management consultant Joseph Juran suggested the principle and named it after Pareto, who at the time showed that approximately 80% of the land in Italy was owned by 20% of the population.  The Principle of Unequal Distribution has been used to describe: 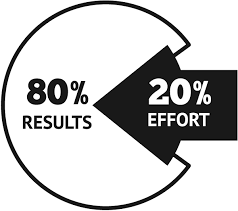 The Principle of Unequal Distribution, also known as Price’s Law (after Derek J. de Solla Price), and the Matthew Principle (after Matthew 25:29 in the bible) has also been used in the strength community to design programs.  At Donskov Strength and Conditioning, fellow athletes/clients may notice a few consistent trends throughout their programming that pertain directly to the Pareto Principle.  In particular, the use of a small number of foundational lifts.  Here’s the Principle in action:

The Pareto Principle of Exercise Selection

If your program is built on a solid foundation of a small number of foundational lifts such as: squats, deadlifts, pressing and pushing, coupled with auxiliary exercises (yes, isolation exercises are ok) that compliment these pillars, chances are Vilfredo Pareto is alive and well in your gym.