Posted by Anthony Donskov on Saturday, 28 March 2020 in Coaching Development

The purpose of this brief article is to explain our testing rationale for the hockey playing population at Donskov Strength and Conditioning.  Each respective practitioner has his/her own unique reality.  The goal is to allow one’s unique reality to dictate the model used for the planning of training, monitoring and testing.  All models are wrong, some are more useful than others.  When it comes to testing, I tend to ask myself the following questions: 1.) What test(s) are the most relevant for our hockey players?  What testing resources do I have at my disposal?  Do I have access to ice?  How long do I have to work with the athlete?  How much time, away from programming do I want to allot for testing?  Is testing necessary?

Prior to testing, I firmly believe that each practitioner should develop a theoretical framework that aids in understanding the “why” behind what is attempting to be accomplished with the testing itself.  Our framework has been adopted directly from Impellizzeri et al [1].  Essentially, we are attempting to start with the scoreboard and work backwards.  The relevant constructs that most in the strength and conditioning field focus on are the physical properties associated with sport and the causal indicators of these constructs.  Hockey is a very unique game in the fact that it’s played on the ice.  The best way to choose relevant tests is to measure direct efforts on the ice (games and practice) and attempt to choose the best test(s) that mimic these efforts.  “A test should be used only if it is valid, more reliable than the event, allows estimation of performance enhancement in the event, and if the subjects replicate their usual training and dietary practices for the study; otherwise the event itself provides the only dependable estimate of performance enhancement [2].”

A distant second is to scour the scientific literature and seek test(s) that most closely correlate into physical skating ability.  In full transparency, our reality in the private sector doesn’t allow us to have access to the ice for testing.  However, several colleagues have reached out and asked me if I did have access, which tests would I use.  The goal of testing/collecting KPIs is not to compete with sport, rather to provide prognostic/diagnostic value in the shortest amount of time with the least wear and tear on the athlete.  Targeted baselines are superior to non-specific noise.  I like the test(s) below because: 1) they are easy to set up, 2) they require minimal resources, 3) they provide adequate information without physiologically interfering with skill work, 4) there has been lots of research done on these tests deeming them reliable (ICC), 5) they mimic the abilities needed to compete in sport [3].

Change of Direction:  S-Cornering Test[4-7].  This test aims at measuring change of direction (#1 located below) on the ice.  It’s a relatively simple test which can be measured with standard timing gates.  This test has a relatively high intra-class correlation (r=0.76).

Acceleration/Speed:  6.1-meter acceleration, 47.85-meter speed test [4, 7].  These tests measure both acceleration from a standstill and speed in a straight line (#2 located below).  Once again, this test is relatively easy to set up and can be done in unison if one possesses two timing gate systems.  Both tests have moderate (r=0.68 for acceleration) and high (r=0.85) ICC’s.

Aerobic Capacity/Lactate Threshold:  Modified Reed Repeat Sprint [7].  This test starts on the goal line.  The player skates to the far goal line, stops and skates through the blue line nearest to the starting goal line (#5 located below).  Six repetitions are performed with a :30 rest between each.  This test has a very good ICC (r=0.99).

There are inherent limitations to each of these tests as none measures hockey IQ, puck control, and the technical and tactical elements needed to play at the elite level.  The best test is the game itself. 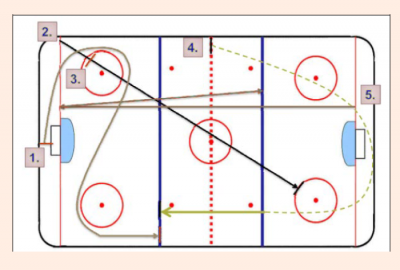 The truth is, we don’t have much time with our athletes.  A good summer at Donskov Strength and Conditioning would be anywhere from 12-20 weeks in length with 3 to 4 touch points/week.   Our philosophy is not to test our athletes.  We don’t feel it’s necessary.  We feel that: 1) it wastes valuable time if it’s not done often,  2) it places tremendous stress on the body day #1 of the program when most athletes are depleted, sore and fatigued from the season, 3) if it’s not done consistently, it won’t steer performance at the micro level.  Instead, we have created a hierarchical decision tree around which off-ice measures best correlate to skating performance. We rate these key performance indicators (KPI’s) and build them into the program each micro cycle allowing us to piecemeal measure on a consistent basis.  The higher the correlation to skating, the higher the KPI stands on our list.

When scouring the research, specifically the NHL combine, very few tests predict on ice performance.  I have writtenabout this extensively in the past.  Additional independent research can be found below and in my new book.

Key Findings: Both the thirty-meter sprint and three-hop jump (as opposed to vertical jump or broad jump) correlated most with on-ice performance (thirty-five-meter sprint and cornering S test).

From this information, we deduce, and plug and play into the decision tree below (Figure 1) to create our KPI measurement battery (Figure 2). 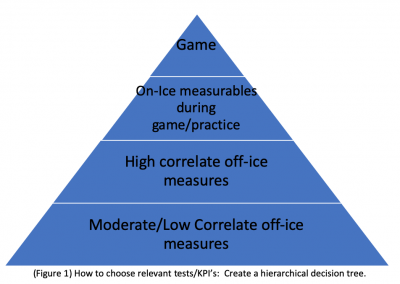 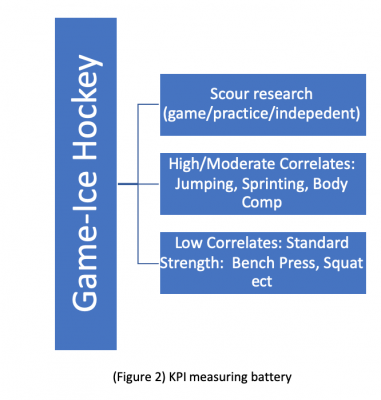 Our KPI’s are measured at the beginning of each micro cycle enabling us to collect relevant information, steer programming while avoiding the learning effect.  The higher the correlation to the ice, the more weight we place on it. These indicators are far from perfect.  NO test can replicate the game of hockey except the game itself.  The key for us is to collect baselines, measure, manage, and adjust using variables we feel will drive success.  Our KPI’s are simple at first glance, but an awful lot of time and effort is spent rationalizing the “why” behind each and every test/monitoring tool.  Every reality is different, our unique reality led us to our current KPI philosophy.