You are here: Home » EasyBlog » Anthony Donskov » The NHL Combine: A Quick look at the Research
Subscribe to blog Subscribe via RSS

The NHL Combine: A Quick look at the Research

Posted by Anthony Donskov on Wednesday, 29 May 2019 in Coaching Development

It’s that time of year once again.  A time when 100+ of the world’s best young hockey players come together to take place in the NHL combine.  Testing, interviews, meetings and assessments all strategically designed in order to further streamline managements draft day decision making.  The tricky part (aside from evaluating on ice skill and character) is deducing which off-ice tests best transfer into on ice performance. 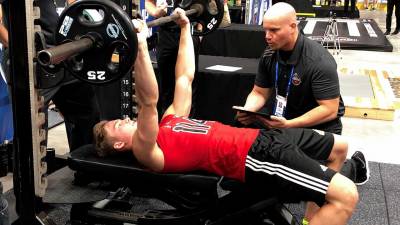 The purpose of this brief article was to explore the research re: the relationship and predictability of combine testing relative to on ice performance.  This review explored 5 research articles.

Question:  Could tests performed at the combine distinguish draft status?  This was a retrospective cross-sectional study design with performance and draft order from 2001-2003.

Findings:  No significant effect of off-ice performance on draft selection.  No single test could distinguish between draft rounds in the 3 years sampled.  “It appears off ice tests cannot accurately predict ice hockey playing ability in an elite group of athletes.”  Perhaps other variables such as on-ice skating ability and hockey sense weigh more heavily in the decision-making process for NHL GM’s and coaches.

Question:  Is positional profiling for Elite hockey players possible by examining anthropometric and physiological performance?  This was a retrospective cross-sectional study design using the same pool of data mentioned above.

Findings:  1) Defenseman were heavier and taller than both forwards and goaltenders.  Defensemen performed more reps on the bench press than both forward and goaltenders. 2) Goaltenders showed greater body-fat percentage compared with forwards.  Goaltenders had greater flexibility, but lower upper body strength measures (bench press, push-ups) and aerobic capacity compared with at least one other position.  No positional differences were discerned from broad jump, vertical jump, aerobic power and curl-ups.  The research supports the use of anthropometric measurements, upper body strength, and anaerobic capacity to distinguish among positions in elite level ice hockey.

Question:  What fitness capacities predict hockey playing potential at the elite level (determined by entry draft order)?  Combine results were compared to draft selection order on a total of 853 players.

Findings:  Regression models revealed peak anaerobic output to be important for higher draft selection in all positions.  Removal of goaltenders from the revealed standing long jump a significant predictor variable for both forwards and defensemen.

The Usefulness and Reliability of Fitness Testing Protocols For Ice Hockey Players:  A Literature Review [4]

Findings: “The majority of studies (15) in this review suggest that off-ice testing has limited use when testing ice hockey players.”  It is proposed that ice hockey adhere to more specific testing measures both on, and off the ice.

Question:  To investigate the importance of body composition in the battery of combine physical tests