You are here: Home » EasyBlog » Anthony Donskov » Injury Rates in the Sport of Ice Hockey: Digging Deeper into the Research
Subscribe to blog Subscribe via RSS

Injury Rates in the Sport of Ice Hockey: Digging Deeper into the Research

Posted by Anthony Donskov on Monday, 24 September 2018 in Rehabilitation

Injury rates in the sport of ice hockey have been investigated by multiple researchers as a means of assessing trends, addressing anatomical areas prone to trauma, and advocating for equipment/rules modification based on inferential findings. The purpose of this article is to a.) define what an injury encompasses in the sport of ice hockey, b.) outline the research pertaining to injury rate computation, c.) reveal anatomical areas that may be exposed to injury at a higher degree during sport competition and d.) briefly outline injury mechanisms and types. 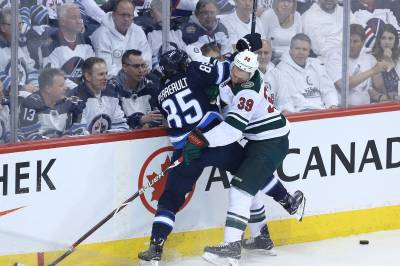 The first task is to define an injury.  In order for the research to be of value, it must be reliable.  Reliability refers to the degree of accuracy or constancy in an instrument or measure.  In other words, consistency in definition is key to tracking anything, including injury rates.  In the sport of ice hockey, injury definition is variable based on league play.  Red highlights seek to uncover key differences in injury definition.  Green highlights seek to expose similarities.

Based on the literature at hand, there appears to be no universal definition of injury in the sport of ice hockey.  This may compromise injury rate calculation as researchers seek to objectify findings on a foundation of reliability.  When probing deeper however, there are similarities. For example, injuries sustained in practice/games causing MGL, injuries seeking medical supervision, fascial lacerations, and concussions all now seem to be included in the current literature.  In order to continue to evolve and collect more meaningful data, it may be best for the various governing bodies in ice hockey such as the NCAA, Canadian University, USHL, Canadian Hockey League, IIHF, and the National Hockey League to agree upon what constitutes an injury.  A collective definition would aid in the calculation of injury rates while avoiding confusion as to which injury type fits into the injury rate equation.

The injury rate takes into account the number of injuries that did occur relative to the number of injuries that could have occurred.  (McKnight et al., 1992)This calculation is typically represented based on an athlete exposure. An athlete exposure is defined as one athlete participating in  a practice or game in which there is a potential for athletic injury.  (Dick et al., 2007). The exposure rates are based off of 1000 exposures.  However, the literature varies in terms of the calculation used to collect these ratios.

Number of injuries/Number of players on ice (one team)/Number of games (Pettersson & Lorentzon, 1993)

Number of injury Events/Sum total of each individual AE time (based on time on ice) (McKay et al., 2014)

Based on the various methods used to calculate injury rates, it may come as no surprise that values have ranged considerably.   Intercollegiate and professional men’s hockey leagues have ranged from 2.3 to 79.2 injuries/1000 player hours.

This variability poses to be of concern when attempting to decipher trends such as the rise, fall or plateau of this variable.  Further, large discrepancies in definition and injury surveillance techniques serve to compromise these calculations.  Using actual time on ice (TOI) from the http://www.NHL. com player statistics page, where the minutes and seconds played by each player are summed across each season to calculate the actual hours on the ice seems to be the most logical and accurate at the moment. However, this measurement is not feasible in most setting thus rendering attendance at games and practices the preferred variables.  Injury rates were approximately three times higher when using total time on ice instead of estimated exposure hours as the preferred denominator.  (McKay et al., 2014)

Anatomical areas prone to injury during competition have also been tracked by researchers.  This information is crucial for team performance staff such as athletic therapists, physical therapist and strength and conditioning specialists as it may steer rehab initiatives and strength related program design.  Based on this review, injuries will be classified in terms of lower body and upper body respectively.

The majority of the research at hand has identified the knee as the most common site of lower body injury.  (Pelletier et al., 1993)(Tuominen et al., 2016)(Mölsä et al., 1997)(Agel & Harvey, 2010)In particular the medial collateral ligament (MCL).  (R. F. LaPrade et al., 2014)MCL sprains result in considerable time lost ranking behind only syndesmotic ankle sprains and concussions.  (Grant et al., 2013)(Flik et al., 2005) In addition, hip related, soft tissue injuries of the adductor magnus and groin appear to be prevalent.  (Agel & Harvey, 2010)(Tyler, Nicholas, Campbell, & McHugh, 2001)This may be due to the near frictionless environment experienced on the ice and the bio-mechanics of the hockey stride which place the structures of the hip (adductors) in a position to eccentrically decelerate at high speeds. Although high ankle sprains are less common in ice hockey, they do account for significant time lost.  (Flik et al., 2005)

Excluding concussions, acromial clavicular (AC) sprains have been identified in multiple literature as one of the most common upper body injuries associated with competitive ice hockey.  (Flik et al., 2005)(Agel & Harvey, 2010) (Kelp et al., 2010)This may come as no surprise as players are bigger, faster, and stronger than ever before.  The force of impact (change in kinetic energy/deformation distance) may allow us to probe deeper into these potential impacts.  When two players moving at roughly 30mph hit one another, loads of kinetic energy are dissipated within seconds making protective equipment extremely imported to absorb, dissipate and redirect the impact of these forces.  Fingers, wrists and hands follow behind the shoulder joint as common anatomical areas that may also be exposed to injury during the demands of the game.

Lacerations, sprains and contusions have all been recognized in the literature  as the most common types of injuries sustained during competitive play.   (Mölsä et al., 2000)(Tuominen et al., 2016)In addition fractures and subluxations have also been prevalent as typical injuries occurring from the demands of competition.

At the current moment, defining what constitutes an injury, and using a universal injury rate metric may be two of the most important steps in better objectifying injury data in the sport of ice hockey.  Lack of clear definition compromises reliability thus affecting accuracy.  In addition to this problem, researchers using disparate calculation ratios further amplifies the varying degree if injury rate figures.  Building resilient athletes with comprehensive strength and conditioning programs focusing on lower body strength and power, corrective exercise targeting the adductor complex and rotator cuff musculature are all important elements when probing deeper into the mechanisms and types of injuries experienced in the sport of ice hockey.