Posted by Anthony Donskov on Thursday, 21 March 2019 in Coaching Development

During the early stages of a resistance training program, improvements typically occur in both neuromuscular efficiency and the sub type of myosin heavy chain (MHC) protein (Kraemer et al., 1988; Kraemer et al., 1996).  The motor unit (MU), composed of a motor neuron and the muscle fiber it innervates, communicates information from higher control centers in the brain to the working muscle.  Motor unit recruitment is based on the size principle which is the relationship between motor unit twitch force and recruitment threshold (Cannon & Cafarelli, 1987; Kraemer et al., 1988).  Heavy resistance training has been shown to increase MU recruitment leading to an increase in maximal voluntary muscle contraction without a concomitant increase in cross sectional area.  This typically occurs during the first 2-8 weeks of training (Kraemer et al., 1988; Kraemer et al., 1996; MacDougall et al., 1982).  In addition, there are rather immediate changes in the sub-type of myosin heavy chain (MHC) protein.  There are seven MHC sub-types (IIB-IIAB-IIA-IIAC-IIC-IC-I) ranging from least oxidative to most oxidative.  Resistance exercise has been shown to decrease the percentage of MHC IIB while increasing the percentage MHC IIA.  Researchers have postulated that this may be due to an increase in oxidative enzymes, and/or that IIB fibers are an un-recruited pool of fibers that when stimulated convert to IIA     (Holloszy & Coyle, 1984; Kraemer et al., 1996).  These neuromuscular and structural changes have been associated with improved strength levels.

During the later stages of resistance training protocol, the quantity of muscle protein begins to increase. This typically occurs after ten weeks of training, or 16+ workouts (Kraemer et al., 1988; Kraemer et al., 1996).  The increase in muscle cross sectional is area is due to both an increase in the size and number of myofibrils, as well as the addition of actin, myosin and sarcomere addition (Kraemer et al., 1988; Kraemer et al., 1996; MacDougall et al., 1982; MacDougall et al., 1979; Spangenburg, 2009).  This remodeling takes place inside the muscle cell.  The increase in cross sectional area is correlated with maximal muscle tetanic force (Lieber & Fridén, 2000).  Protein synthesis is a complex physiological mechanism dictated by the genetic code (Spangenburg, 2009).  The facilitation of the mTOR pathway is thought to be primarily responsible for the increase in protein synthesis.  Upstream regulators of the mTOR pathway are still under investigation but it appears as though promising studies are underway regarding insulin-like growth factor (IGF-1), stretch activated channels (SAC’s), Leukemia inhibitory factor (LIF) and focal adhesion kinase (FAK) (Spangenberg et al, ’09).  The long-term structural changes of resistance training appear to be due to the quantity of protein and an increase in cross sectional area which improves overall force generating capacity. 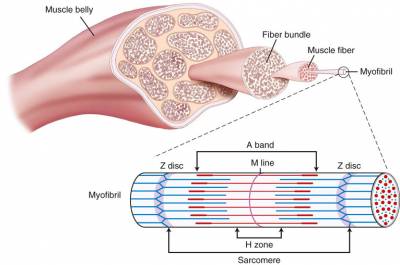 Mitochondrial adaptations to resistance exercise appear to be minimal.  When comparing a group of individuals before and after six months of resistance training, researchers found a 26% decrease in mitochondrial volume density and a 25% decrease in mitochondrial to myofibrillar volume ratio (MacDougall et al., 1979).  Both mitochondrial volume density and mitochondrial to myofibrillar volume ratio may be considered as the respiratory capacity of the muscle (Holloszy & Coyle, 1984; MacDougall et al., 1979).  It appears as though the increase in contractile proteins attained from resistance training, may negatively affect the respiratory capacity of the muscle even if the mitochondrial content stays the same (MacDougall et al., 1979).  Endurance training however, has been shown to positively affect mitochondrial density (Holloszy & Coyle, 1984).  Previous sedentary individuals adapting to endurance training have increased the number of mitochondria and oxidative enzymes.  Alpha-levulinic acid synthase is thought to be a key enzyme involved in mitochondrial adaptation as well as enzymes involved in the malate-aspartate shuttle which transport hydrogen and NADH into the mitochondria from the cytoplasm as byproducts of glycolysis (Holloszy & Coyle, 1984).  These metabolic adaptations in the muscle enable participants to exercise for longer durations of time while sparing glycogen breakdown, using fat as an energy source, and enabling performance enhancement.