Posted by Anthony Donskov on Tuesday, 03 December 2019 in Programming

Welcome back!  Last month we spoke in depth about how movement efficiency off the ice can tangibly aid in on-ice skating performance.  We used basic physics to determine that if we increase impulse (the product of net force and the time the force is applied) we can improve our stride efficiency while using less energy to accomplish a given task.  Let’s stay with basic physics as this helps elucidate just why strength training is important for the aspiring hockey player.  First, we must proceed with an elementary understanding of force.

Force:  In physics, force is something that causes a change of motion in an object.  A force is a push or pull resulting from the objects interaction with another object.  Whenever there is an interaction between objects, there is a force acting upon each of these objects.

I know what you’re thinking: “Great! Thanks for another physics lesson, but please get to the point.”  Almost there, in order to understand just how important strength training is we must attempt to comprehend one more snippet from the world of physics.  Let’s take a deeper look at Newton’s third law of motion:

“For every action, there is an equal and opposite reaction.” 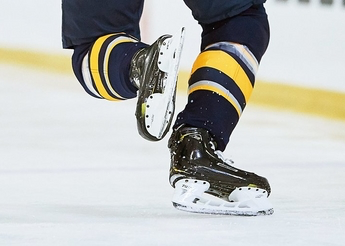 The force experienced on the ice is a result of the relationship between the skate pushing against the ice, and the ice/gravity pulling in the opposite direction.  The latter is called ground reaction force.  When we lift weights, we improve our force generating capabilities.  As a consequence of this, we are able to push more forcefully into the ice.   The ice responds with a counter force in the opposite direction, and the end result of this is an increase in speed and acceleration capabilities.  That’s right, speed = driving force into the ice.  In this case, force = strength.  Therefore, an increase in strength leads to an increase speed.  What a great thing.  By simply getting stronger, young players directly improve their speed on the ice.  Strength training is an extremely important tool for young and older players alike.  Like all tools, it’s important that it’s used properly and safely in order for it to produce its desired affects.